You may recall in my last post that my computer decided to give up the ghost.  It is still dead, and did not magically return from beyond the grave.

Remember, too, that pile of boxes containing computer parts…?

(Pictured: a cute case, the motherboard, the CPU, the power supply, a 120 SSD hard drive, 16 gigs of RAM, a box of speakers, and a keyboard and mouse.) 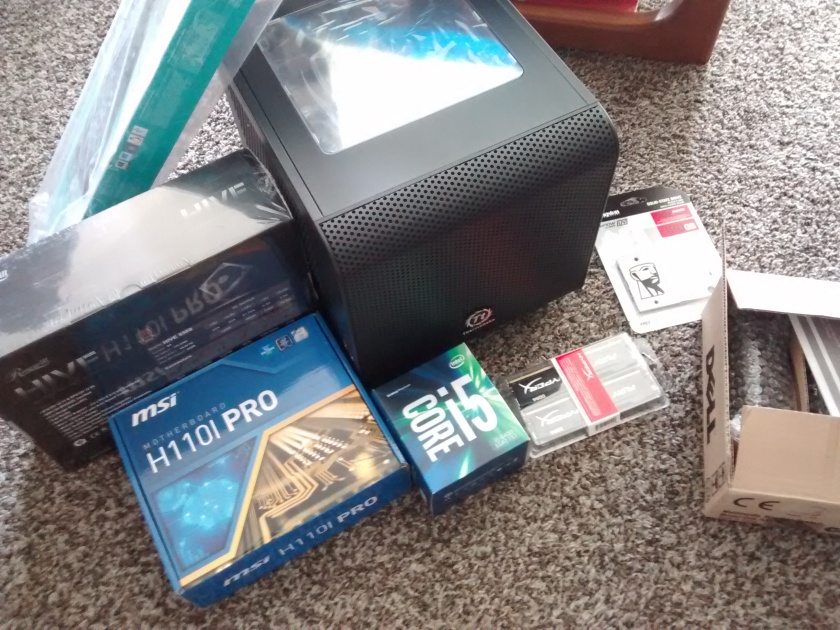 That turned into this:

(Pictured: a half-filled computer case, with the motherboard, CPU, and other fiddly bits still outside the case)

Which eventually turned into a computer!

Several friends and youtube videos were consulted as I started putting together a computer for the first time, and I would have been sunk without them. But other than the learning curve, once you get going it’s not bad. It’s shocking (or not, rather, as I went to great lengths to avoid static electricity that might fry the delicate components during this!) that you can put together a computer with nothing more than a screw driver!

Attempt #1 at building a computer… was a failure. Lights and fans were a go, but no life once plugged into a monitor, and I began wondering if I’d made a horrible mistake by undertaking this plan. Computers are fussy little things, and when they don’t work, it’s hard to tell if it’s because something’s unplugged somewhere, or because you fried the CPU!

So I put it away for the day and took it apart and tried again the next day.

Luckily, attempt #2 the following night (during, I might add, a thunderstorm*) was a home run. 🙂

(Pictured: a computer with the sides and top of the case still pulled off, but fully functional)

That, right there, is a working computer. 🙂

As of this morning, said cute little box of wires and plastic and metal (and cords. So many cords) is running Windows 10 and has my CS6 version of Photoshop installed and running like a dream.

Despite some worries and concerns and a few minor hiccups, operation Build a New Art Computer has (so far) been a total success. I have a computer with 16 gigs of RAM, ready to take on any Photoshop file I throw at it.

I can’t wait to dig in again. I’ve been without an art computer for 2 weeks now, and have missed it.I love drawing by hand and painting with traditional media, but sometimes the answer is to have as many options at your disposal as possible.

There’s going to be a 3rd installation to this story, very likely in the next week or so, about a very cool piece of technology I’m planning on acquiring…

This entry wouldn’t be complete without a mention of the cat assistance I was rendered during this build. Curious Georgia loves new things to explore with her entire body, and this computer was no different. In addition to my quest to make sure I was safely discharging static electricity before touching any of the components, I also quested– endlessly and fruitlessly– to remove stray cat hairs. 😉

(Pictured: A cat doing what cats do best: sitting on things you don’t really want them to be sitting on)

* Thunderstorm, new life… is it any surprise I named the computer Frankie? 😉